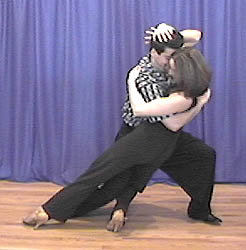 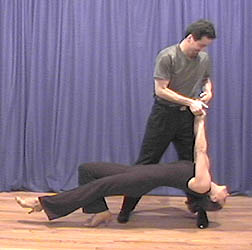 Both videos were filmed with my highly gifted partner Lauren Mones. Lauren has danced extensively in New York City and elsewhere. Before making this video, we taught and danced intensively together for over a year and a half. 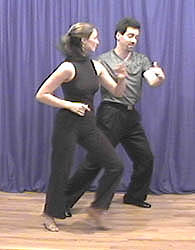 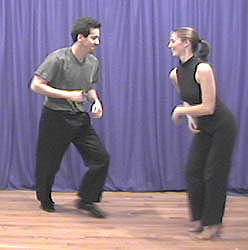 Both videos contain moves which, much like "Cool Moves Revealed", are at the Intermediate to Advanced level.
The level of Volume II is a little higher than that of Volume I.  However, both videos contain moves from the Intermediate to Advanced level.  Volume I is geared more towards putting together short routines of moves.  After a few moves are shown, a full routine using these moves (and others) is shown. Volume II contains two (out of ten sections) with this format.  The rest is move, after move, after move ...

The moves in the videos, much like that in "Cool Moves Revealed" is a mix of New York, Los Angeles, and some Cuban-style Salsa.  Volume II contains many more Cuban moves than Volume I (About 30% Cuban in Volume II, and just about 5% in Volume I.)

Each move is shown twice, from different camera angles, dancing to up-tempo salsa music.  Then, each move is broken down by verbally counting, "1,2,3,.,5,6,7."  For some moves, we go further and explain a few key points about the move (how to lead it, footwork, etc.)  The routines are danced once to the music, and then broken down by counting in the same fashion. 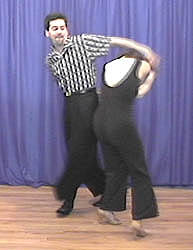 "Hot Moves for the Salsa Addict, Volume I":

Each routine was originally developed and taught in month-long classes.  On the video many of the moves of each routine are presented as separate moves.  Then they are all put together into a routine.  These routines could be used by other instructors as a basis for a multi-week class.  Volume I alone, which contains 9 routines, could easily provide an instructor with at least 9 months of material for classes.

All of the dance steps shown are leadable and followable - NOTHING is choreographed. This means, that once you and your partner are familiar with the moves, they can be led without any notice other than a good lead.

At the end of this video there are a series of demonstrations of impromptu salsa dancing.  Nothing is choreographed.  Some of the moves taught in the video are done, plus numerous others we did spontaneously.  By carefully watching these demos, you can learn more moves, and even pick up some style.

The Guide to the Videos 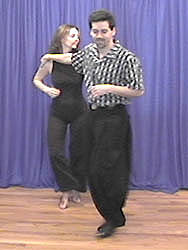 As was done for "Cool Moves Revealed," there is a complete list of the moves contained in the videos.  This time there is even more detail, with each eight counts ("1,2,3,.,5,6,7,.") on a separate line on the guide.  Please goto the guide page for more details ... 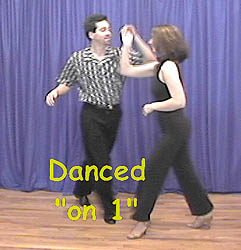 Click here for sample video clips from the videos